Ahead of Turn of the Screw, we speak to Co-Producer, Dermot McLaughlin! 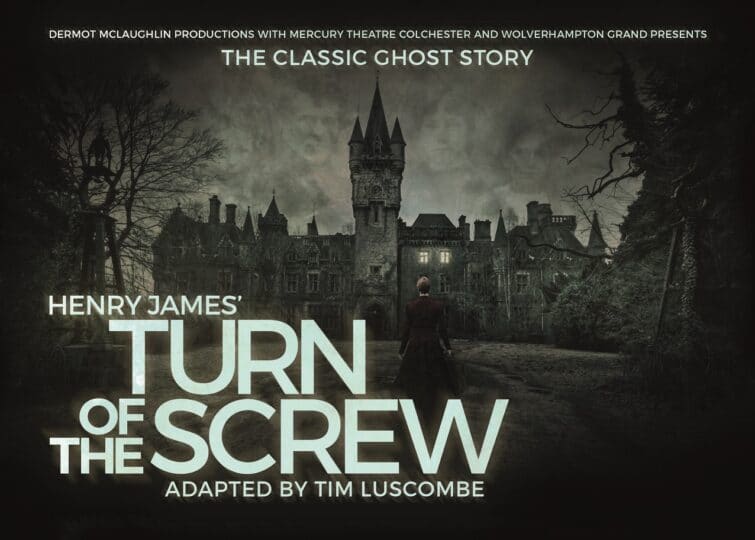 Turn of the Screw, our first Made in Colchester production of 2018, opens here at the end of February. We spoke to our co-producer, Dermot McLaughlin about the play, our adaptor Tim Luscombe, and what it has been like working alongside the Mercury and the Wolverhampton Grand on this project.

Can you tell us a bit about your background and what motivated you to become a producer?

I decided to make my career working in the theatre in my teens. I flirted with Stage Management then having had a brilliant time performing in the local amateur theatre youth group summer musical, I decided on acting. However I never lost my curiosity for how shows were put together. Wind forward to 2011, my acting career was not as good as it once was (understatement), my creativity needed an outlet and I didn’t want to work in any other industry, so producing found me I suppose. I studied an MA in Producing at Birkbeck (wonderful time and the only male on the course alongside 9 amazing women). Studying the MA brought me back to my passion which is theatre rather than acting. Attending the Stage One workshop for new producers shortly after my studies was invaluable and a whole new vista opened up. I am immensely fortunate that I have gone on to benefit from their Bursary and Start Up schemes for Turn of the Screw. My instinct to go into Stage Management was probably right, it just took me 25 years to work it out!

What inspired you to commission the script from Tim Luscombe?

All producers have ideas on the simmer. I like the expression “tickling up”, borrowed from salmon or trout fishing I think. And as a new producer I was no different. One day I was musing on the success of The Woman in Black stage adaptation – I like the style of that production, it’s small and something similar felt like an achievable project for a new producer. I tickled the idea for a while, researching the original novel and other adaptations, and all iterations of The Woman in Black. I discovered the intriguing relationship between the two books and when I read the opening chapter of Henry James’ original I felt immense sympathy for the central character. I was moved by her need to work out her past or justify/excuse herself. It takes courage to face past errors and accept the truth. This aspect of the novel is often seen as subsidiary and is mainly over-looked by adaptors. For me it pointed the way to an approach to adapting, that I believed was the right way to do it – that is, it would hold true to the original and deliver an experience for the audience that is close to that of the reader of the novel. It was quite a detailed idea that I felt had to be realised – “if I don’t do it, someone else would!” I laboured for a couple of years trying to move the project  forward before I connected with Tim.

He has been a brilliant collaborator and bravely took on this commission from a new producer with very strong and specific ideas. I think we have both been quite bold in our own ways. Tim was absolutely the right person for this adaptation, I think he is a much under-valued writer and I have had a great time working with him.

How have you found planning the tour?

Interesting! Laborious! Confusing! Challenging! This project has been a series of “firsts” for me and none less than booking a national tour of 11 weeks at this level. I’m amazed and proud that I did it. I have a pretty strong title though, which is widely known, so venues have been willing to give it a go. I have learned a great deal and ultimately quite enjoyed it.

What has it been like to work alongside the Mercury and Wolverhampton Grand on this project?

Brilliant! An absolute pleasure. I am immensely grateful for their support and generosity. I began my career acting in buildings like the Mercury, that housed a dedicated band of people all working together to make shows and connect with the audience. For me places like the Mercury and The Grand are where it’s at. They are a wellspring of skill, knowledge, talent, dedication and community. An essential resource. It has been a real pleasure to re-connect with all this positive energy and activity. Regional theatres are the backbone and foundation of our national theatre culture and it is important they survive and thrive. (Stepping off my soap box now!)

What can we expect from this version of Turn of the Screw that makes it different to the original text?

Well I can’t give too much away now, can I? The action slips between 1870 and 1840. In the novel the Governess has written down her experiences in Bly, 30 years after the spooky and frightening events. Our 1840 is faithful to the original, 1870 is true to the spirit of Henry James but, in an inventive and surprising way. It is a very theatrical approach which reveals all the layers of subtext in the original, letting the audience to reach their own conclusions.

Have you got any burgeoning plans for the future?

Always tickling! You have to keep challenging yourself with what’s next. We producers tend to keep our cards close to our chests see above. There are musicals and plays in the mix, however I can’t say when my next project will be that is as bold, time consuming and as satisfying as Turn of the Screw has been.

Turn of the Screw runs at the Mercury Theatre from Fri 23 Feb – Sat 10 Mar, for more information and tickets please click here.

For more information about the UK Tour please click here.