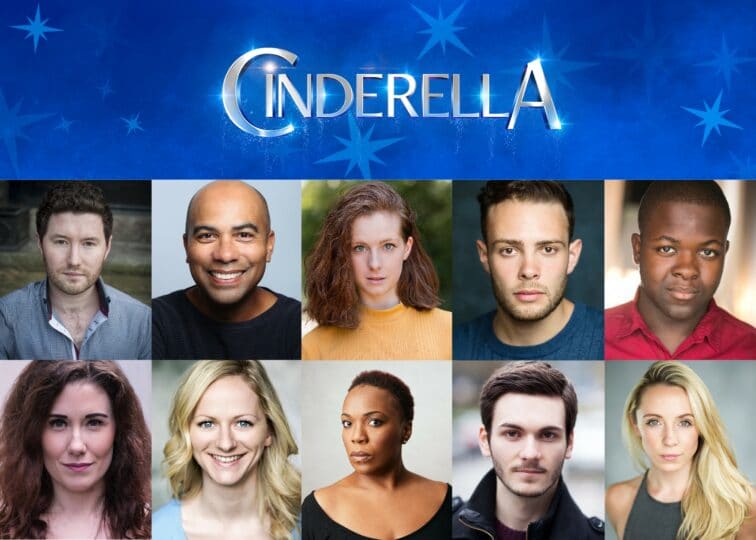 Cast announced for the Mercury Theatre’s 2019 pantomime, bringing a team of new and familiar faces to Colchester!

The Mercury panto is back, and this year it has been supersized to delight audiences at the 840 seat temporary venue, Mercury at Abbey Field. Colchester panto favourites Antony Stuart-Hicks (Jack and the Beanstalk, Snow White, Dick Whittington) and Dale Superville (Jack and the Beanstalk, Snow White, Spamalot) are back for another festive season, this time forming a dastardly duo as the Ugly Sisters.

Leading the rags to riches tale is Mari McGinlay (Night of the Living Dead at The Pleasance, Oklahoma! at Royal Albert Hall), in the titular role of Cinderella. For the Live Stream of Cinderella, the role of Prince Charming is played by Samuel Knight (Jack and the Beanstalk & Snow White at the Mercury Theatre). Joining the adventure to the Prince’s ball will be Nicholas McLean as Buttons (Avenue Q UK Tour, The Book of Mormon at Prince of Wales Theatre) whilst Genevieve Nicole (Hairspray UK Tour, Guys and Dolls at the Savoy Theatre) will rule the roost at Hard Up Hall as the Baroness. Helping Cinders to find love will be Nerine Skinner (Beauty and the Beast at Salisbury Playhouse, Dick Whittington at Theatre Royal Bury St Edmunds) as Dandini and Deborah Tracey (Standing at the Sky’s Edge at Sheffield Crucible, Absolutely Fabulous: The Movie) as the Fairy Godmother. The cast is completed Ashley Runeckles (Beauty and the Beast at Salisbury Playhouse). NB: Prince Charming was also played by Jack Reitman (Amour at Charing Cross Theatre, Thrill Me at Hope Mill Theatre), however due to illness, Samuel Knight played this part on the day of the recording.

Places are still available for the Junior Chorus auditions which will take place on Sun 8 Sep, find out more by visiting the Mercury Theatre website.

“We’re delighted to announce this incredibly talented cast who are bound to have audiences in stitches! This is a very special year for us as our pantomime will be performed in a magical temporary location, directed by our new Creative Director, Ryan McBryde and written by the brilliant Andrew Pollard. All of these new and exciting changes will add to the festive family treat the people of Colchester know and love!”

Cinderella will play at the Mercury at Abbey Field from Saturday 30 November until Sunday 5 January, tickets are available now. Book yours online here,  by phone 01206 573948, or in person at Mercury Tickets.