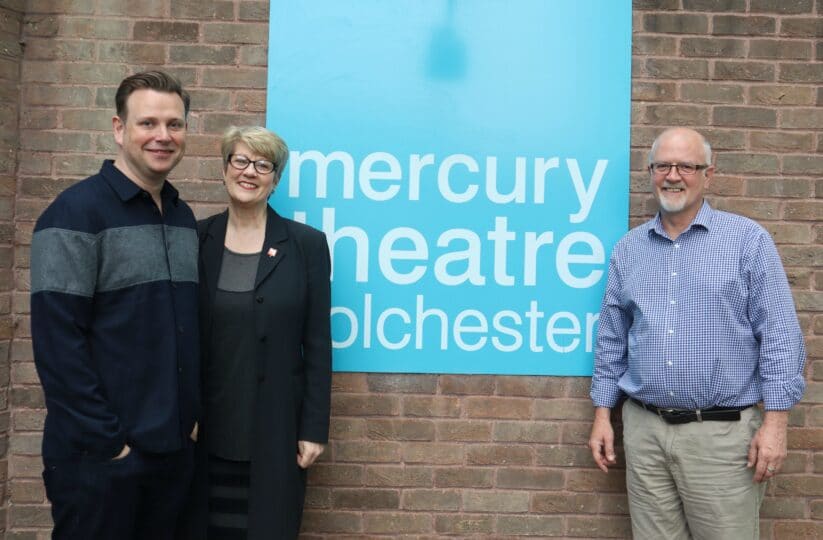 Working alongside Joint Chief Executives Steve Mannix and Tracey Childs, newly appointed Creative Director Ryan McBryde will join the team leading the creative vision for the theatre. He takes up his role in June, and his first season will launch the newly refurbished building in Autumn 2020 following the £9.7m refurbishment.

The new leadership team also sees Tracey Childs continue in her role as Executive Producer and Joint CEO following her interim appointment in May. Childs has worked as the Mercury’s producer since 2014, and has helped build the theatre’s reputation as a creative regional powerhouse producing work of exceptional quality in Colchester that tours nationally and internationally. Joint CEO and Executive Director Steve Mannix continues to lead the theatre and its Capital redevelopment.

McBryde is one of the country’s most exciting directors. He has made his name working across the UK and Europe, with recent credits spanning musical theatre and pantomime, to classic texts and new work. His relationship with the Mercury began in 2018 with two critically acclaimed productions Moll Flanders and Pieces Of String (UK Theatre Award nominee for Best Musical Production and winner of Best New Musical at the Stage Debut Awards). His focus will be on Mercury’s artistic and talent development programmes alongside the Mercury’s own Made In Colchester productions. Prior to launching his first season in the Mercury’s brand new building in Autumn 2020, 2019 will see him direct both in-house productions at Mercury at Abbey Field – the Mercury’s temporary 800-seat theatre tent; a large-scale community production of Oliver! as well as the theatre’s annual pantomime Cinderella. This ambitious pop-up venue will see the theatre almost double its current capacity for a season of home grown and visiting productions.

“The Mercury Theatre is a regional engine-room, producing world-class theatre. I am extremely honoured to be joining their inspiring team. When we throw open the doors to our new building next year, we want it to be bursting at the seams with artists, members of our community and creativity. I cannot wait to start generating stories that reflect the hearts and minds of the varied communities that populate our vibrant region.”

“This is an incredibly exciting time for the Mercury. With the capital redevelopment well underway and our off-site season about to begin, this new leadership structure is designed to fit the needs of the Mercury as we look to a hugely exciting future, balancing both the artistic and strategic needs of the organisation. I am delighted to be able to welcome Ryan to the Mercury team and to continue working with Tracey after the success of our work together this past year.”

“I am delighted to have the opportunity to continue to lead the Mercury. I am hugely proud of everything we have achieved over the last year. Having worked with Ryan on some exceptional productions, I am thrilled that we will have the opportunity to develop and expand the theatre’s creative ambitions together. I can’t wait to get started.”

Chair of the Mercury Theatre Board of Trustees, Kathleen Hamilton, said:

“I am extremely pleased to be able to announce the Mercury’s new leadership team. Steve, Tracey and Ryan have a remarkable combined skillset and their joint vision for this next stage in the Mercury’s history will see the theatre continue to make an exceptional contribution to the creative and cultural life of the region.”