Sorting out the past with volunteers Martin and Jan 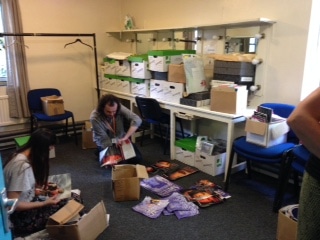 What is it like being a volunteer on the Mercury Voices project? Here are the thoughts of two of our volunteers, Jan and Martin.

Jan and Martin have been volunteering at the theatre for over 10 years, helping with mail outs in the Marketing department.  When Mercury Voices was awarded funding from the Heritage Lottery Fund and made a call out for volunteers they decided to help out on this too, as Martin explains: “Well, someone mentioned it as I already volunteer at the Mercury and am interested in the theatre.”

“I can walk from home!” said Jan, “But also this is a way of staying involved with the theatre.  I think it’s important that all the stuff from the past is kept, looked after and archived.”

Since February 2017 they have become part of our regular volunteer team coming in to the theatre to help build the Mercury archive and support events.  We’ve discovered boxes of things in offices, in drawers and under desks, have sorted them out and are now cataloguing in as much detail as we can.  We’ve had training in oral history from Colchester Recalled and taken advice on archiving from the Essex Record Office.  We’ve had to consider the archive golden rules of ‘pencils only’ and ‘no coffee near the collection’, but have enjoyed our tea breaks – usually with biscuits! – with new found friends who share similar interests.

Much of the work we’ve been doing so far has involved “sorting great heaps of stuff” as Martin says.  Looking at old programmes and posters, and recognising plays and actors names from the past, has brought back a lot of memories for all our volunteers and there have been many discussions about when plays were, who was in them and what was enjoyable about them.

Working with such knowledgeable people has been a real bonus for those of us less familiar with the theatre’s past.  Martin and Jan have both been able to use their knowledge of past productions to help create the archive catalogue which involves detailed recording of when and where a show was performed along with names of the cast and creative team.  The catalogue will be invaluable, not only in making sure we know what we have and where it is, but also in answering questions staff and researchers have.  We’ll be able to tell how many times Cinderella has been on (we’ve counted six so far: 1976, 1984, 1998, 2003, 2009, 2014) and that Gary Oldman appeared in ‘Oh What a Lovely War’ in 1981.

Something that Martin has enjoyed is remembering the staging of productions:

“One of the things about not having curtains is being able to see the set before the play starts and to contemplate it and wonder how it will work.”

Our volunteers have also helped out at exhibitions and events.  Martin helped to install our exhibitions in the Digby Gallery earlier in the year and at Colchester Library in July.  On Saturday 5th August, the Mercury Theatre held its annual Supporters’ event.  Jan helped with choosing what to display, including some striking production photos of Roger Delves-Broughton as Malvolio in 2005’s Twelfth Night.  Jan even brought along some of her own collection to show people as she explains:

“For the production of Northanger Abbey, a request was sent around asking people to sponsor part of the costume (they were short of money I suppose) and I sponsored part of the dress and the reward if you like was getting a print of the design.”

Jan brought along the print of costume designer Jill Amos’s work which we were able to display alongside the 1996 programme acknowledging Jan’s sponsorship of Catherine Morland’s fan. Other donations were made towards Mrs Thorpe’s bonnet, two flood lights and amber gel, and General Tilney’s breeches were sponsored by Captain and Mrs White.

Mercury Voices is a two year project bringing together the archive of the Mercury Theatre and collecting oral histories from staff, performers and the community.  Our volunteer team supports the project in a number of ways from collections work to helping at events.