Cast and Creatives announced for Aladdin! 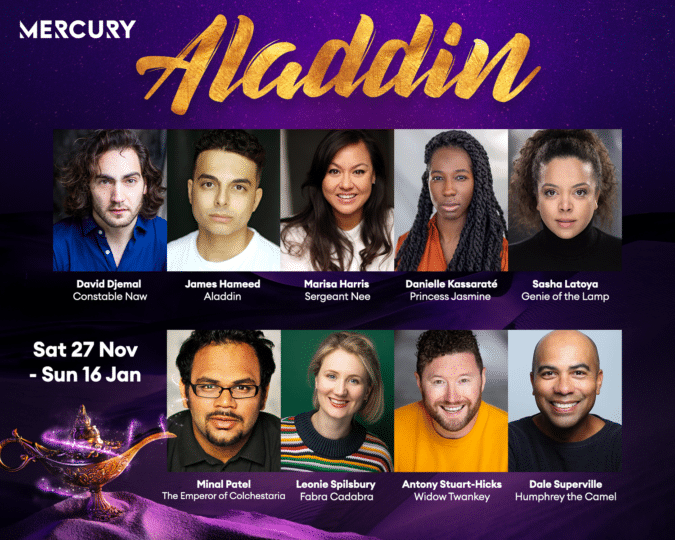 Creative Director Ryan McBryde said “This will be our first pantomime in the new building after a three-year hiatus and we just can’t wait to welcome audiences back. Pantomime is our biggest, brightest show of the year, where our local community comes together to experience the magic collectively. This Christmas we’re presenting Aladdin, a story of joy and transformation to delight and warm the hearts of our audiences at this festive time of year. In this version of the story, Aladdin is a street busker with aspirations to be a rock star so there’ll be music from Queen, Journey, Bon Jovi and The Script!”

Journey with us to distant shores where the penniless Aladdin dreams of winning the heart of the rebellious Princess Jasmine. When he is tempted by an evil sorceress with the promise of untold riches, our young hero finds himself trapped in the Cave of Wonders with nothing but his wits and a battered old lamp. Little does he know that its contents will change his life for ever.

Will Aladdin defeat the wicked sorceress? Will the Princess Jasmine ever notice him? And will the Genie of the Lamp make all his wishes come true?

Hop aboard your magic carpet for a hilarious, fun packed adventure full of song, dance and all the usual Mercury magical mayhem!

James Hameed pays Aladdin. His theatre credits include Gaddafi: A Living Myth (London Coliseum), Spamilton, Fiddler on the Roof (Menier Chocolate Factory), Asylum (Red Lion Theatre), and Be More Chill (The Other Palace/Shaftesbury Theatre). His television credits include Ball and Boe: Back Together Again and Song for Nature.

Marisa Harris is a recent graduate from The London School of Musical Theatre. Aladdin marks her professional debut as Sergeant Nee.

Minal Patel plays The Emperor of Colchestaria. His theatre credits include Curtains (Wyndham’s Theatre/UK tour), Man of La Mancha (London Coliseum), Cereal Café (The Other Palace), Aspects of Love (Southwark Playhouse/Hope Theatre Manchester), Dialetikon (Park Theatre), The Secret Garden (The Barn Theatre), A Midsummer Night’s Dream (New Wolsley Theatre), The Queen and I (Arcola Theatre), As You Like It (Southwark Playhouse), and Beauty and the Beast (Theatre Royal Stratford East).

Antony Stuart-Hicks returns to Mercury Theatre Colchester to play Widow Twankey – he previously appeared in Cinderella (Winner of 2020 Best Ugly Sisters – Great British Pantomime Awards), Jack and The Beanstalk, Snow White and Dick Whittington. His other theatre credits include: Your Nation Loves You (Delirium/The Old Vic), The Hound of the Baskervilles, Romeo and Juliet The Musical, Alice in Wonderland, The Snow Queen, The Ugly Duckling (UK tours), Elegies for Angels, Punks and Raging Queens (Criterion Theatre), and Hamlet, The Tempest, A Midsummer Night’s Dream (UK and international Tour). For television, his credits include Liverpool One, And the Beat Goes On, David Copperfield, In His Life and Fan and Friend.

Ryan McBryde is the Creative Director of Mercury Theatre. His productions for the Mercury include Baskerville, Oliver, Moll Flanders and Pieces of String (the latter was nominated for UK Theatre Award for Best Musical Production and won Best New Musical at the Stage Debut Awards). Other recent credits include Romeo and Juliet (Theatre Trier, Germany), Faust, 1984 (Alte Schauspielhaus Stuttgart), Love on the Links, Before the Party, Beauty and the Beast, Cinderella, Aladdin, Jack an the Beanstalk (Salisbury Playhouse), The Invisible Man (Queens Theatre, Hornchurch), Saturday Night Fever, Angus, Thongs and Even More Snogging (West Yorkshire Playhouse), The Who’s Tommy (European tour), A Day at the Racists (Finborough Theatre/Barking Broadway), The House of Mirrors and Hearts (Arcola Theatre), Lia’s Guide to Winning the Lottery (Bridewell Theatre), and Terie Vigen (Royal Concert Hall).