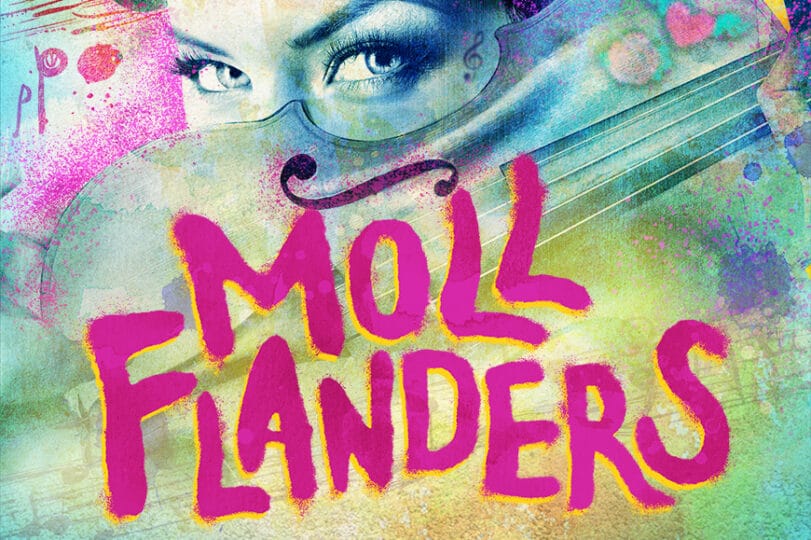 Following the success of Pieces of String earlier this year, the Mercury Theatre Colchester today announces the premiere of Moll Flanders

Written by Nick Perry; Directed by Ryan McBryde; Musical Design by Paul Herbert; based on the novel by Daniel Defoe

The Mercury Theatre Colchester today announces the world première of Nick Perry’s Moll Flanders, adapted from the novel by Daniel Defoe. The production, directed by Ryan McBryde opens on 28 September at the Mercury, and runs until 13 October.

Despite the runaway success of his novel Robinson Crusoe, the author Daniel Defoe is up to his ears in debt and desperate to write another blockbuster. When he falls into bed with the notorious courtesan Elizabeth Atkins, raised in Colchester, the stories she tells him about her action-packed life give him a great idea. He’ll turn them into a novel called Moll Flanders and it’ll fly off the shelves. But he hadn’t bargained on becoming entangled in Elizabeth’s tumultuous intrigues and adventures himself, or falling in love with her…

The world premiere of Nick Perry’s unfaithful adaptation features a cast of terrific actor-musicians in a mashup of 18th century bawdiness and 21st century humour. Join Moll as she takes Dan on the ride of a lifetime!

Moll Flanders is adapted by Nick Perry. Nick’s first play Arrivederci Millwall won the 1986 Samuel Beckett Award and a film adaptation was broadcast on BBC2 in 1990. His other plays include Smallholdings (King’s Head) and Near Cricket St Thomas, 1919 (Stephen Joseph Theatre). His feature script The Escapist was produced by Sky Pictures in 2001 starring Jonny Lee Miller and Andy Serkis. TV credits include Clubland (1991) and Superbomb (2007). Nick is a prolific radio dramatist and his many credits include Moll Flanders for the Classic Serial starring Jessica Hynes and Ben Miles, two series of his original drama November Dead List, the classic Western The Shootist starring Brian Cox, Referee for which Andrew Scott won BBC Audio Drama Best Actor, and The Loop, which won Bronze at the 2010 Sony Radio Awards. Nick is currently writing an Eric Ambler season for Radio 4.

“I’m delighted to be directing Daniel Defoe’s Moll Flanders for the Mercury this autumn. Nick Perry’s wonderfully irreverent adaptation has captured the heart of the original book but has also given it a mischievously modern makeover in the spirit of Blackadder. Our heroine Moll has to employ all of her drive, resourcefulness, resilience, ambition, wit and insightfulness to survive in a man’s world. It’s a ribald, riotous romp through 18th century England and Virginia and I can’t wait to get started!”

Moll Flanders is a Made in Colchester production, presented by arrangement with The Touring Consortium Theatre Company.