The Panto Diaries: Michelle Payne looks back on Cinderella 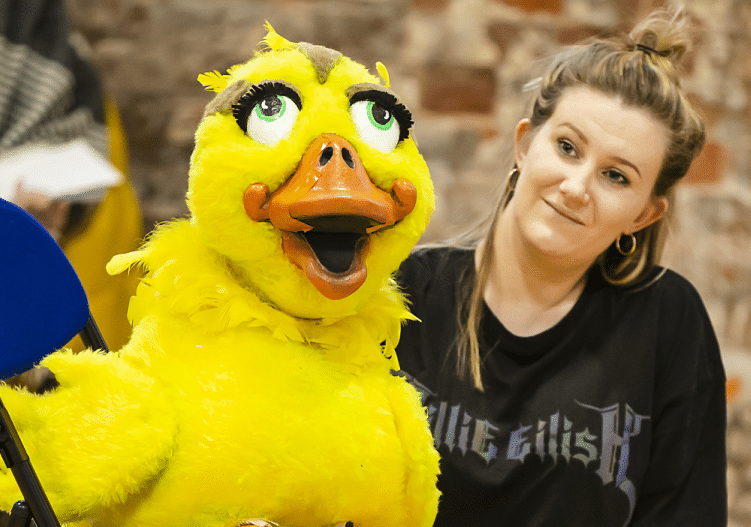 We were delighted to welcome Michelle Payne to the Mercury as Assistant Director for last year’s sparkling pantomime Cinderella; a three month placement with us through the Regional Theatre Young Director Scheme. Below she takes us through her experience…

After directing fringe projects for a number of years, I went to a local artists meeting with Tracey Childs & Dilek Latif at the Mercury Theatre Colchester. The idea was for them to connect with Essex based creatives and expand their network. I felt at home right away! Not only was it amazing to discuss my passion for female-led story telling set in Essex but I felt heard and supported in a career where you’re constantly rejected and knocked down.

In the weeks that followed, Tracey suggested that we could submit to be part of the Regional Theatre Young Director Scheme. The scheme requires the theatre and applicant to submit together to say how the application will mutually benefit the theatre and the director. After many forms to fill in and interviews, I was selected and Tracey phoned me to break the exciting news (& obviously hear me both scream and sob down the phone!) I couldn’t believe I’d get to work with these awesome people on their beautiful panto!

I was able to be part of the Cinderella audition process, meeting lots of brave, talented actors who sung at us and made us laugh. One of my favourite auditions was Mari McGinley who ultimately went on to secure the lead role of Cinderella.

Meeting the creative team was one of my favourite parts of the process. Creating fringe theatre involves wearing many hats. Often have I found myself producing, choreographing, sound designing, carrying large pieces of set on the tube to the venue  (usually furniture that I’ve stolen from a family member’s house). So to have a whole team of people working in specific areas to bring the show together was overwhelmingly exciting!

I first met Choreographer Charlie Morgan as I was observing Oliver. She moved large numbers of cast members around the space with ease & still managed to make it look exciting and polished. A Mercury Theatre veteran, she helped me feel at home straight away.

Musical director Nick Barstow is someone I can only describe as a “10/10 hun”. Insanely talented, hard working and my favourite person to grab a coffee, beer or fish and chips with. Not only could he create new pieces of music with just a glance from our director, he also has the most gorgeous singing voice and a brilliant sense of humour.

Director Ryan McBryde, with his impressive CV and body of work, was the person I was most excited to meet & work with – He suggested I’d become part of his brain by the end of rehearsals and moving into tech – I was excited by this, I wanted to be brilliant at my job and learn from the best. (Being part of Ryan’s brain also involved finding all of his jokes funny, just FYI).

After knocking around this industry in various guises for just under ten years, I was lucky enough to already have worked with a couple of the cast members or at least be aware of their work.

The first day we had a full company meeting. Production staff and the Mercury building staff were all present at this first day meet and greet. We read through the script and were howling at Ash & Dale’s mispronouncing of the word “goblins” – a gag which ultimately made it into the show.

After this we got cracking straight away to get this exciting show on it’s feet! The cast sang through everything with Nick. (I can still randomly sing say… the tenor line of One Night Only!)

Rehearsals were divided up into singing rehearsals and scene work to start. We’d work through one scene at a time, and Charlie joined us when we hit a song to choreograph!

There’s a running joke that assistant directors are judged by how good they are at making a cuppa tea! Ryan never made me feel like I was there as the tea girl, so I worked even harder to make sure he always had a cuppa in his hand! And we’d laugh how that definitely wasn’t my job, but it did give me an excuse to go into the kitchen and pinch some of our DSM Emilie’s home baked brownies.

In the lunch breaks we all sat round a big table, and laughed, so hard, as we got to know each other better, preparing to spend Christmas in a tent.

Genevieve Nicole was often the main source of my laughter alongside a particular anecdote from days of pantos past from ASH – this private joke ran between the company for the entire contract. Prince Charming drove me to the co-op for lunch, the Fairy Godmother offered kind words of wisdom and Dandini provided girly chats. Working with fairy tale characters is fun!

Nick McLean, our Buttons, trained at drama school with with my sister & they’ve been best friends ever since, so I’ve followed his career after they graduated. Yet I was still blown away the first time I heard him belt Somebody to Love.

We were also lucky to have a brilliant junior chorus in our production. I’d not worked on a show with a junior chorus before so there were more skills to be learned here! They were hilarious, a few adopted me as their “stage mum” and they added a unique energy and enthusiasm to the rehearsal room that only young actors can!

Production meetings were exciting too, hearing all the various aspects of the show spoken through aloud. With each meeting the vision of our full production was becoming clearer and clearer. Ryan is brilliant in all areas, he can retain everything about our two act musical spectacular in his head and articulate clearly to everyone involved. I am in awe!

For anyone who was lucky enough to see our award nominated production of Cinderella, you’ll know that we had a magical, flying swan that took Cinderella to the ball instead of the classic pumpkin carriage. On the first day of tech, the cast weren’t called until the evening in order for us to get all set transitions as smooth as possible. During this time, guess who got to tech in the magic, flying swan scene as Cinderella?! THIS GIRL. As Tim the lighting designer and Ryan liaised to ensure Ron the swan was lit as beautifully as possible,  Tracey took photos of me beaming whilst soaring high over the empty auditorium. I’d never had special effects sequences to light before with big set pieces, so I took mental notes while I was completing the complex task of looking elegant on a giant, flying swan.

Tech week is notoriously a stressful process and I’m sure it was at the time, but I look back with nothing but fond memories (at least that’s what my Instagram story highlights lead me to believe). Seeing our show come alive with a gorgeous design, talented actors and people all around working hard to make the show as special as possible, makes me so proud to be a part of this process.

Technical manager and deputy production manager Ben Wills taught us all the three original musical theatre steps. The box step (obviously), side to side with jazz hands and the shoulder shimmy. A stressful week, yet we were all still laughing a lot.

The Show is Up

Thinking back to the first previews gives me butterflies and makes me insanely proud. The whole process was now reaping rewards as we listened for audience laughing in the right places and monitoring their reactions from the top of the grand stand.

We exchange cards and sweets and cuddles and enjoy finding our way through the first few shows in preparation for the press day.

I make friends with the band, Phil & Josh, and become their chauffeur to maccies after a long day of shows! (Disclaimer: definitely not part of the assistant director role).

Another exciting aspect of this production was the opportunity to be part of The Undateables on Channel4. The Undateables is a docu-series following the lives of people navigating the dating world. Daniel Wakefield had proposed to his partner on last year’s Christmas special, so this year they wanted to do something for Christmas before they get married next year. Our pantomime was chosen to feature on the show. Ryan and Nerine (Dandini) created a scene as part of the song sheet for “Prince Daniel” to surprise his “Cinder-Lily”, invite her on stage to try on her very own glass slipper. The feature made it onto the show, including our rehearsal process with myself reading in for Lily. Another proud moment for me working on this beautiful show!

Another brilliant part of being an assistant director is running understudy rehearsals. Our understudies Sam and Ashley had a date each to play Prince Charming and Dandini respectively, however they also understudy the entire company. This means each learning four tracks – covering between them every character’s scenes, choreography and vocals.

We worked through character by character to begin with. Sam and Ashley were incredible to work with, the most organised, conscientious performers as well as super talented. They were so prepared for each of our rehearsals and we worked through all of the material thoroughly and efficiently.

Illness is often inevitable during panto season, meaning Sam and Ashley were also able to go on together as Cinderella and Prince Charming – another proud moment (that ultimately made it into my Instagram story highlights). A day that also, due to quick changes, earned me the nickname of Emergency Goblin. Rachel (wardrobe) laughed and took photos as I posed backstage in the giant green goblin outfit ready for my Mercury panto debut.

This job and the people I met and worked with along the way will be something very special to me as my first assistant directing job. I was made to feel so welcome and I learned a lot.

I am also thrilled to say we have been nominated twice at the Great British Pantomime Awards. Best Ugly Sisters (ASH & Dale) – I mean, obviously! And Best Pantomime 750-1500. We knew we had a special show on our hands, so being nominated just put the cherry on top of this awesome process.

I have lots of thank yous, bear with!

Firstly thank you to RTYDS for choosing me for this opportunity – specifically Davinia Jokhi and Sue Emmas for always being on hand to answer my questions and offering further support post contract.

Thank you to the entire creative team & crew for providing so many laughs, being helpful, clear and making me feel a valued part of the team.

Thank you Tracey and Dilek for meeting with me in the first place and providing the opportunity to work with your brilliant theatre! Two women who are super inspiring and I would be thrilled to work for again!

Thank you Ryan for teaching me so much and for being patient and funny. So many new skills that I observed from you I am taking forward into my own rehearsal rooms. I actually had to make quite a bold decision about a show’s over-arcing concept the other day and really wished you were there so I could ask your advice – (maybe expect an email! Haha)

Thank you to everyone at the Mercury Theatre Colchester. What an amazing team to be a part of for the Christmas season!