Here’s what our Youth Theatre think about our summer show, Peter Pan! 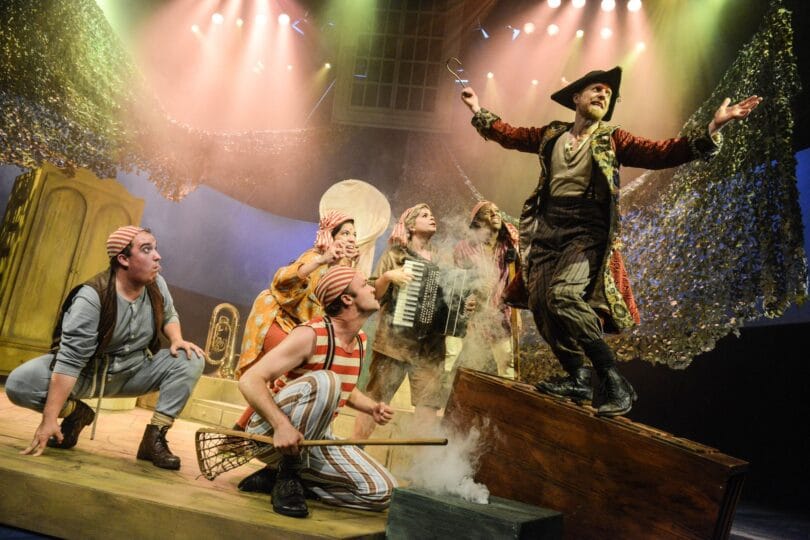 We currently offer our 14-18 Youth Theatres the chance to complete the nationally recognised Arts Award. As part of the qualification we give young people the opportunity to be audience members of our productions and to write reviews of the shows. Reviewing professional work develops their opinions, their critical response, and their art form knowledge and understanding. So with our summer Made in Colchester production of Peter Pan firmly underway, we invited them in to review the show, here’s what they had to say!

For those who love a magical adventure, the Mercury Theatre Colchester’s spellbinding production of Peter Pan is the perfect show for your family this Summer. The well-loved classic novel by J.M Barrie is beautifully adapted and directed by Daniel Buckroyd and Matthew Cullum and is brought to life by a stellar company of actors.

The story follows Wendy Darling whose ambition is to avoid growing up and is always fantasising about dream worlds. One night she experiences an unexpected visit by a mysterious boy called Peter Pan. He flies in through her open window and they realise they share the same passion for remaining young. Peter encourages Wendy to escape to Neverland with him to be a Mother for the Lost Boys. But as well as promises of enchanting adventures, the crew must also face Peter’s nemesis Captain Hook. This terrifying pirate and his motley crew of sea rovers dampen the spirit of Neverland. However, every villian has a weak point and luckily Peter and team know who to call upon… the crocodile! Filled with swashbuckling pirates, other-wordly spectacles, tales of friendship and discovery, the plot of Peter Pan is fast paced and intriguing.

One of the elements that really stood out for me was the fantastic set design by Simon Kenny. As the first scene began, a glittering disco ball was revealed and the auditorium was filled with tiny specks of silver light which created a mesmerising atmosphere. A back drop of the midnight blue sky scattered with stars was a constant fixture and this definitely conjured a fantasy feel. The tall window through which Peter appeared took prominence and it very much gave the impression of being the portal that transports you from reality to Neverland. I found the use of levels really effective as I think it helped portray the different characters status’s throughout the play and the revolving stage gave a sense of progression and urgency.

The lighting design by Mark Dymock was superb and his work especially shone for me during the Mermaid scene where the characters get submerged in water. The stage becomes bathed in aqua blue creating the fluid movements of water perfectly. I also loved the movement in this scene and you really did believe they were struggling to get to the surface of the sea. Even though all the actors were suitably cast, the pair I found particularly engaging were Emilio Iannucci as Peter, and Charlotte Mafham as Wendy. The two made a believable partnership and Wendy’s evolving maturity was well developed.

I recommend this show to children aged 7+ as younger viewers may find the appearances of the crocodile too sudden and Captain Hook too threatening. This entertaining retelling of Peter Pan is a show not to be missed and I would love to be taken on a journey with Peter and the Darling family again.

So grab your tickets for the Mercury’s production of Peter Pan to escape from the chaos of British Summer and be transported to an extraordinary world every child dreams of. “Tick-tock, tick- tock”, time is running out – Neverland is nearer than you think!

Peter Pan was an amazing show at the Mercury Theatre, perfect for all the family!

I thought the songs added into the piece were brilliant, and James Peake’s Nana was absolutely hilarious! I was amazed by the number of instruments the cast could play, and Daniel Buckroyd and Matthew Cullum made use of this as the songs were almost always accompanied by the cast themselves. This helped to bring the show alive for the audience.

Emilio Iannucci played Peter, and brought to his character that important innocence that goes hand in hand with the dangerous, feral quality of Peter Pan. They made the characters fly for extended lengths of time through lifts, which was surprisingly just as effective as it would have been through harnesses.

Charlotte Mafham played Wendy and conveyed brilliantly the motherly qualities of a young girl, and demonstrates her need to care with both her brothers and the lost boys. The transitions from the lost boys into the pirates were seamless for such a small cast- and very clever! It was done in a way that was humorous for the adults involved who understood it was the same cast members, but in a way that the children would be none the wiser as they were captivated by the magic of Peter Pan.

The crocodile effect was also cleverly achieved, as well as the Tinker Bell effect as a small light, who then transforms into a person. This helped to demonstrate the cheeky, jealous nature of Tinker Bell as a fiery tiny light. Alicia McKenzie’s fairy language interpretation is also fantastic and added to her character’s jealous nature.

All in all, it was a great performance which I will recommend to all my family.

On Thursday 27th July the first ever dress rehearsal of ‘Peter Pan’ was shown to a select audience.  The show followed the original storyline of the book ‘Peter Pan’.

Overall it was very entertaining and it was very imaginative with the use of scenery and props on the stage. In addition, every character had extremely good facial expressions, which helped the audience understand the play. Also the design of the props and how the actors used them worked very well. The only constructive criticism I have for the play is to make sure the audience joins in a lot more this would make the play even better than it already is.

I would rate this play 4.5/5, because everything flowed very well and overall is a class play. I recommend this to all ages because it is suitable from 3 year olds to 50 and above, it is also a very well knownstory so everyone will want to see it. I would definitely watch it again because it had such a good story line and very unusual scenery, which looked great.

It began with an engaging opening, with the cast going into the audience then using a framing device to tell their story, which made the audience curious to see what happened next.

From twinkling stars to stunning decorations, the scenery was amazing throughout. With only making minimal changes scene to scene each time, the scenery perfectly managed to reflect the atmosphere and tone of the scene, making the play feel more immersive. The play also felt very artistic often, for example how they showed Peter Pan getting his shadow back, or Wendy going back through the window.

I thought the acting was wonderful and immersive. Emilio Iannucci (Peter Pan) portrayed a childlike but interesting, layered character. Charlotte Mafham (Wendy) plays a dreamy and caring character, and the other characters like the lost boys were funny and the mother was kind and the father strict- they were all acted well. The cast were also responsible for changing the scenes, and they did a fantastic job of this and tackling multiple roles with each individual character they played acted fantastically, and it never felt like you were seeing the same person twice.

However, there were some negative points. Some scenes seemed slightly confusing at times as there were many scenes which had little relevance to the plot so some could get confused at what is actually happening. How Tinkerbell ‘talked’ or the lost boys shouting could seem annoying to some older audiences, but these parts did not last very long, and I believe that the positive points greatly outweigh the negative points!

It ended with an exciting and engaging scene, with the audience curious to see why certain events were happening or what the outcome would be. It had a heart-warming final ending, and I found how they portrayed the next generations of children going to visit Peter Pan very cleverly done and memorable.

I also thought that the songs were great, and while there weren’t a lot of them, they stood out and flowed very naturally with the rest of the play.

Overall, despite some negative points, I think that ‘Peter Pan’ Is a delightful, fantastically, memorable play. I would recommend this to families and children, as you will be guaranteed a fun night out!

Peter Pan has always been a family classic – and the Mercury Theatre’s interpretation of the world-renowned story promises nothing less. The adaptation by Daniel Buckroyd and Matthew Cullum not only shows us the story in a way that is easy to understand, but makes the feelings of every character open and accessible – portraying the raw emotions of the characters in both song and script.

The plotline of the story takes us on the journey of Wendy Darling, and her escape from reality to go to the Neverland with Peter Pan – where both of them can enjoy the benefits of never growing up! Wendy takes on the task of playing mother to the Lost Boys, all while being hunted by Captain Hook and his dastardly following of evil pirates. However, the hunter often becomes the hunted as Captain Hook’s arch-nemesis, a gigantic crocodile, follows him about looking for a meal…

For me, one of the standout features of the production was the seamless transition of the actors between their roles, in particular of the Lost Boys to the pirates. The portrayal by these actors of two intrinsically opposed characters often back-to-back with only a few seconds offstage to change between the two was impressive, and many of them, including Katharine Moraz, threw themselves into a third role (Katharine also played Mrs Darling) with gusto, and brought out another perfect portrayal.

Not only was the acting fine-tuned to the point of perfection, but creative use of the theatre and space helped to make the show interactive for the younger children – at the very start of the play the actors filed down the aisles at the edge of the theatre, asking plot-related questions to the audience, and at the end of the production the younger children were invited on stage to meet the characters, and to admire the scenery and revolving set.

The Mercury Theatre’s production of Peter Pan has a little something for everybody – action scenes, character development, interactive capability for younger children – a ticket to the theatre becomes a chance to enter the enchanting world of Neverland – and to experience a fine rendition of an all-time classic – Peter Pan.

If you haven’t yet caught our production of Peter Pan – hurry! Performances run until this Saturday, 26 August. Tickets are available from our box office by calling 01206 573948 or by clicking here.

If you’d like to know more about our Youth Theatre and to book for next team please click here.