What makes the Mercury Theatre tick? 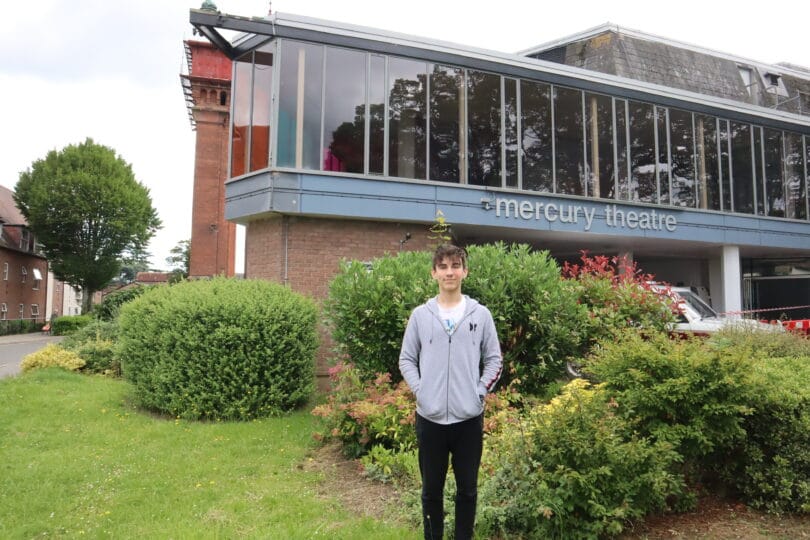 My name is Fraser and I am in year 10 at Honywood School. Earlier in the year we were tasked with finding a work placement for the week, and after applying at a few places I was thrilled to hear that I was able to do my work experience at the Mercury Theatre. I have been performing since 2013 and I have always been interested in what makes a theatre tick, so when I was given the opportunity to work here I had to take it!

On day one I was shown to the office I would be based in for the week and introduced to all of the different teams from marketing to finance. I was then told about the interesting history of the Mercury Theatre and all the health and safety procedures to make sure I stayed safe during the week. I was then shown to my desk and given my diary which listed all the activities I would get to do during this eye opening week. The first activity on the agenda was to get familiar with the website to enable me to write and edit this blog.

Next up I was shown how to use the camera, I then went out and took photos of the Mercury’s new ticket office which was fun because I’ve never used a proper camera like that before. My final task of the day was to write some questions for the different teams at the Mercury that I would be visiting over the week, so I could find out more about how the organisation works. 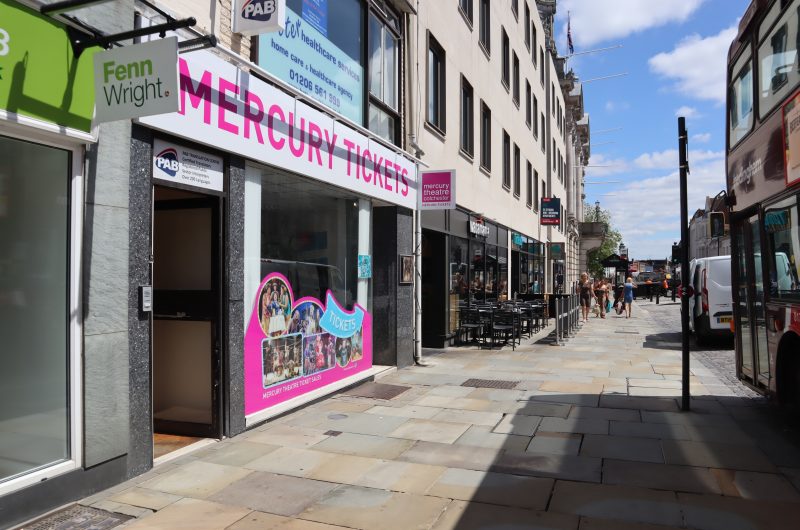 Today I came in as usual and was greeted by everyone and was introduced to some staff I had not met before. I logged into my computer and finished some of the work I started Monday. After this I was then shown to Mercury Tickets and was introduced to Ollie, Maddy and Emma. The team made me feel very welcome and I then asked them the questions I had prepared.

I was told there is a lot more to do, there will be more staff than before, their own car park, a bigger auditorium (from 500 to around 850) so a lot more customers to accommodate.

The team told me that they all share a mutual love for musical theatre and that they all enjoy making sure their customers feel important.

I was told to always make sure you keep a calm environment so you can try and resolve the issue. The team always try and see a situation through the customer’s eyes as if they can understand why someone is frustrated it should mean they can help the

The team told me they enjoy the problem solving aspects, dealing with people, being the first face seen by the public and getting to work with the people who have the same interest in theatre as you. I was then told about their ticketing system, Spektrix, and shown how to use it. Finally I had a meeting with the marketing team and we discussed the campaigns for Oliver! and Cinderella, the two Made in Colchester shows that are coming up at Mercury at Abbey Field. 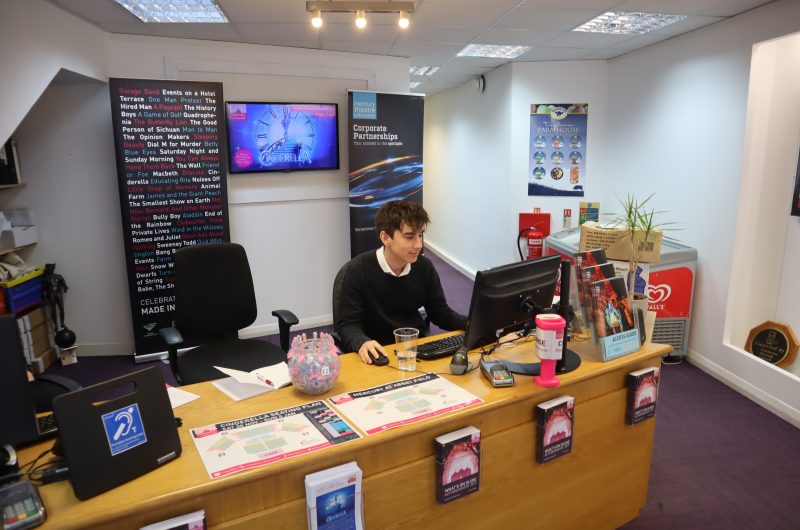 Today I came into the office as normal and sat down at my desk and was greeted by everyone as usual. After sitting down for a little while to finish off a little bit of work from the day before I looked at my timetable to see that I was working with the scenic team today. I was then taken over to the theatre which looks quite different now it is under refurbishment! I was introduced to David and Rhi who were really kind to me and explained what I would be doing for the day. After that they offered me a cup of tea and I asked them a few questions about their profession.

Both Rhi and David had very different answers for me, one of them was taught in a college and was naturally gifted at art and the other did not have an interest in art throughout school but found a love of it through theatre, and by being in the right place at the right time.

They both said that they loved working on the set of James and the Giant Peach and especially making the stone inside of the peach. This was a real challenge for them and something that they had never attempted before.

I was told that it is not always easy and scenic artistry can be a very difficult and challenging business which involves a lot of hard work and commitment. You need to be passionate about your work and make sure you get some experience in a theatre relatively early.

Rhi & David said they really enjoy sitting down to watch the shows, it is very rewarding to see their hard work paying off and they enjoy watching the audience’s reactions to the sets.

After my time with the scenic team I had a meeting with the Associate Producer, Dilek. This was an eye-opening meeting and I was shocked to find out how much work the producer does to ensure a show runs smoothly!

Dilek gave a lengthy but amazing description of what a producer does, my hand couldn’t keep up with all that she said – but I think I got the most important bits! Producers all work very differently but all tend to find and manage budgets, oversee the project and of course make lots of important decisions. Some producers prefer to source a creative team themselves, but quite often at the Mercury you already have an amazing team ready and waiting for you. Another big role is to work with talent agencies and organise auditions to find the cast for a show.

Dilek explained that all producers know what they like and don’t like, and it is very hard to produce something that you don’t believe in. She will often watch and read lots of shows for inspiration and to try and gain an understanding of what audiences seem to enjoy. It is important to find pieces with a strong plot and something different as audiences usually want to see something new and different. Lastly she explained that she likes to be able to find plays that will take an audience on an adventure.

There are many different ways, but Dilek gave a very good simple answer which was easy for me to understand. She explained that having leadership skills is very important. Also start with producing as soon as you can even if its small events like a party or an assembly because as soon as you get a rough idea of what producing is you can work up through the ranks and start producing bigger shows.

Dilek told me that, much like Rhi & David, that she enjoys sitting down with the whole team that have worked on the show and watching it together so you can really appreciate what you have achieved. 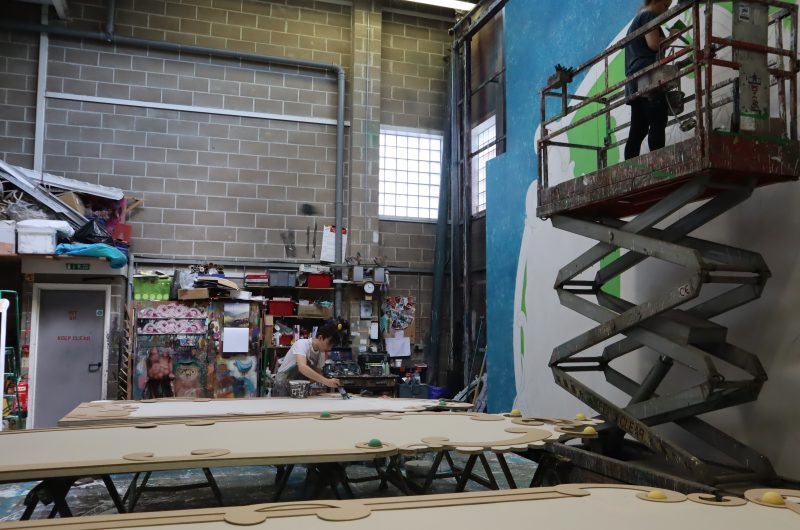 Today I came in and finished off a little bit of work I had from the previous day. Throughout the morning lots of the team came over and asked me how I was getting on which is always very nice. I checked my schedule for the day and found that today I’d be with the stage management team. I went over to the workshop with Gillian, one of the assistant stage managers, who was very kind and welcoming. She explained that I’d be helping her to paint the props for the Made in Colchester show, Oliver!. I also got a chance to ask Gillian a few questions…

Gillian explained that she had always been involved with theatre groups and knew that she wanted to work in theatre but wasn’t sure exactly what she wanted to. She eventually found a technical theatre course which she loved and went on to get a degree.

I was told that you usually have to study at college and get a degree, but it also helps to have a talent for art and design. She also advised that it is worth asking to help out with a local youth theatre and getting as much experience as you can.

Gillian said she loved working on Grapes of Wrath because it was a very busy show and lots of the props had to be made so it was a great challenge. She also enjoyed James and the Giant Peach as there were lots of little intricate props that were fun to make, and lastly Saturday Night and Sunday Morning because the props were very interesting to source and make.

Gillian explained that she enjoys researching props for the right time period and the challenge of finding exactly what a designer wants and lastly making the props themselves. 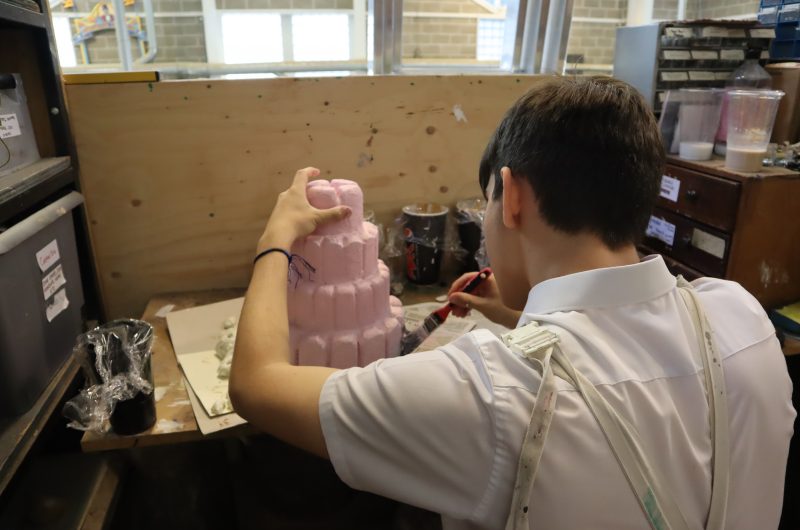 Friday was my final day so I made my way into the office for the final time. I went through my notebook and checked to see if I had missed anything important from the previous day. After that I drafted some social media posts for some of the different shows coming up. I then checked my diary and saw I’d be spending the morning with the wardrobe team. I was introduced to Chantelle who again was very welcoming.

Chantelle showed me round the building and explained how they store and sort out the costumes. She then gave me the task of putting together two costumes for the Oliver! cast, one for a man and one for a woman. To help me with this I was given some images to look through of people from the Victorian era. I really enjoyed this task as I have performed in lots of shows but I’ve never had to put together a costume myself. When I had finished I sat down with Chantelle and asked her a few questions about her role.

Chantelle explained that she really enjoyed working on Turn of the Screw and in particular making Mrs Conray’s costume as it was a real challenge. In general she said she enjoys the challenge of making period costumes and also making costumes for the pantomimes as they are usually full of bright colours and made with interesting fabrics.

I was told that usually a lot of velcro is used! Also costumes will be pre-set in certain positions backstage so the cast will know where to go and dressers will be there to help them.

Chanetelle originally did a fashion course but eventually decided to specialise in costume and has had training in hair and make up along the way. Before she worked at the Mercury she worked freelance for a while, making a lot of costumes for TV and Film, her highlights included working with Mike Lee and making some costumes for a James Bond film.

Chantelle told me that she really enjoys that every day brings her new challenges and she likes that she often has to problem solve and think on her feet. Her favourite part of the process is getting to watch the shows she has helped with. 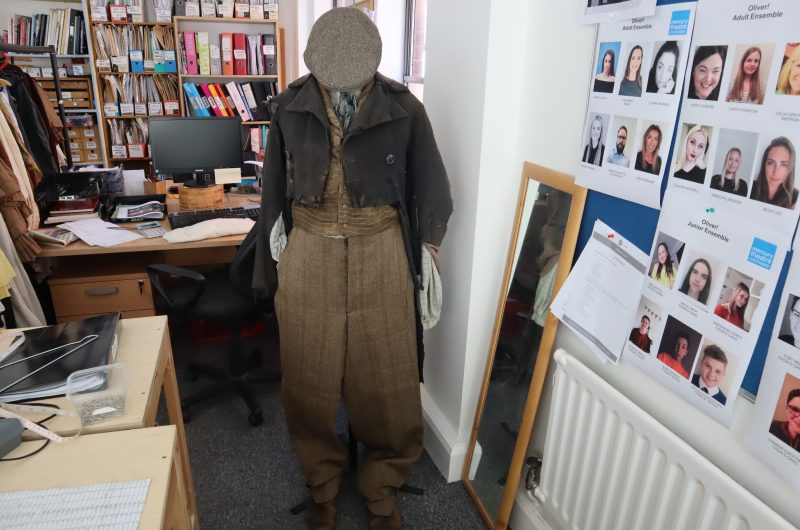 Before I sign off I would like to thank everyone at the Mercury for letting me do my work placement with them, they have given me a vast insight in to what they do and have all been very kind, welcoming and generous to give up their time for me.